Skip to content
HomeShollallahu ala sayyidina muhammadinTahajjud Dua – Tahajjud Hadith
Shalat tahajud is a prayers performed at night after sleep, even when asleep
just a moment. This corresponds to the meaning contained in the word
“tahajjud”, i.e. “waking up from sleep”. So the conditions for implementing
shalat tahajud is “having slept before”, even for a moment. The law of prayer tahajud is
mu’akkad circumcision, which is highly recommended, because according to the hadith of the Prophet,
the most important prayer performed after the obligatory prayer is prayer
tahajud. The number of rak’ahs of tahajud prayers is at least 2 rak’ahs, and maximum
not limited. So prayer tahajud can be done no matter how much, as much as possible. Rasulullah saw used to perform prayers tahajud as many as 10 rak’ahs plus 1 rak’ah of circumcision witir 8 rak’ahs plus 1 rak’ah of circumcision witir and 8 rak’ahs plus 3 rak’ahs of circumcision . So in performing tahajud prayers should be supplemented with sunnah prayers witir . This prayer tahajud should be performed 2 rak’ahs 2 rak’ahs (2 rak’ahs of salam). While the sunnah prayer witrnya ,
if done more than one rak’ah, for example 3 rak’ahs, may
done at once with one salutation, can also be done 2 rak’ahs
first, then 1 rak’ah left.
As for
The time of performing tahajud prayers is after waking up from sleep and
after the evening prayer, well at the beginning of the night (the first third of the night between
Isya time and 22.00 WIB), midnight (third third of the night,
between 22.00 and 01.0.0 WIB), as well as late at night (third
last night, between 01.00 and before dawn). One third
This last night is the most important time to perform
prayers tahajud. Because according to the hadith of the Prophet, at that time God’s mercy
down, so that whoever prays will be granted, whoever
asking will be granted, and whoever asks for forgiveness will be forgiven
by God. For that here I will discuss about Tahajjud Dua – Tahajjud Hadith

Meaning: (in the heart at the time of takbjratul ihram). “I (intention). Tahajud sunat prayer 2 rak’ahs, because of Allah Ta’ala”

After completing the tahajud prayer, followed by witr sunnah prayer.

After that, continue by reading the following prayer, namely: 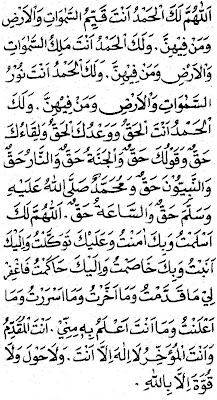 (In
reading the prayers above, and other prayers, should begin with
read “hamdalah” and “shalawat to the Prophet Muhammad”, and ended
with “hamdalah” as well, such as prayer after Fardhu prayer).

After completing the prayer, should be continued by reciting istighfar as much as possible. Istighfar read is:

Meaning:
“I
ask forgiveness of Allah Almighty, who has no other god
He. The Living and the Living Alone, and I repent
to Him “Or can the following istighfar be read: 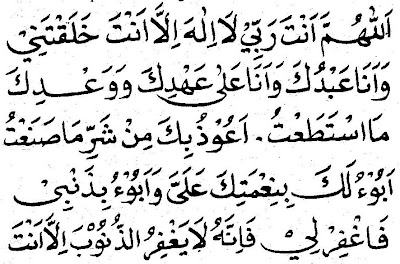 “O
God! You are my Lord, there is no God but You, You have
created me, and I am Your servant, and I am in
Your promise, to the best of my ability. I seek refuge in You from evil
whatever I have done. I confess to You the favor that You have
grant me, and I confess my sin. So forgive me,
because no one can forgive sins except You “So much discussion this time about Dua Tahajud Hadith hopefully useful for all of us.